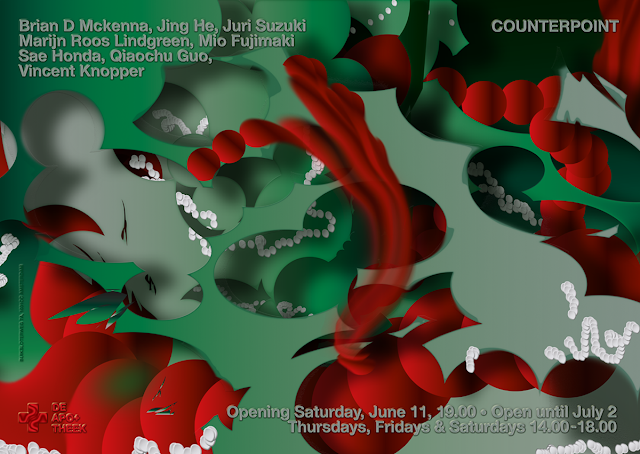 Poster by Kristiāna Marija Sproģe
Counterpoint
In everyday life, each of us perceives and experiences our environment and society differently. In the repetition of our daily rituals – getting up, eating breakfast, brushing our teeth, getting to work – we may find moments of curiosity. Our eye might be caught by an architectural detail or material finish, or a particular aspect of a social phenomenon might stand out to us. These poetic discoveries create a degree of plurality to the mundane; another layer to everyday life. They allow us to define a space of our own within the constraints of a pre-existing system. They give us a counterpoint.
We exhibit our separate practices of observation and interests together in the space of De Apotheek. We see the exhibition space as a playground: we collaborate to create a group show through spatial experimentation. How do the artworks merge, relate and reflect on each other? Our shared interest is experiencing and experimenting with space through sculptures, installations and video-works. How can we perceive this curious and uncommon space with art pieces? Counterpoint presents the results of our curiosity with a combination of our pieces.

Brian D. McKenna (CA) was born in Ottawa in 1975, some 2 hours and 20 minutes before the earth-orbit docking of Apollo and Soyuz. He grew up in the former European Union countries of Scotland and England before settling in Western Canada in the mid-1980’s. He received a multidisciplinary BFA in visual-art and music from the University of Lethbridge and an MFA in visual-art from the Sandberg Institute in Amsterdam. Since 2002 he lives and works in Amsterdam as an independent audiovisual artist and his work is presented internationally. McKenna works part-time as an instructor and researcher of media-technology at the Sandberg Institute and more recently is a PhD candidate at the University of Amsterdam.

Juri Suzuki (JP) came to the Netherlands in 2008. She holds the Master of interior architecture of the Sandberg Instituut and BFA from Gerrit Rietveld Academie, BEng Architecture from Tokyo University of Science. Her works are mostly related to space, local, global materials, and political issues. She writes her observations of everyday life and political issues such as immigration and the Fukushima Catastrophe.  http://jurisuzuki.com

Marijn Roos Lindgreen (NL, 1993) lives and works in Amsterdam, the Netherlands. Her artistic practice is driven by an interest in the human experience of architectural space. Some of the themes being explored, within this broader scope, are flexibility of spatial boundaries, relativity of mass, and the creation of fictions by means of space. Positive and negative space, inside and outside, and other poetic opposites often reoccur. Starting points for these explorations are found in the artist’s (and others’) immediate surroundings, literature and architectural prototypes. In the form of text or installation the work reflects on the function our environment, on all scales, fulfills and proposes alternatives.  http://marijnrooslindgreen.nl/

Mio Fujimaki (JP) Through the making process, Mio Fujimaki understands and connects to the world she finds herself in. Motivated by a quest for deeper or alternative understanding, she researches the manufacturing processes of ubiquitous items, everyday mundane objects and phenomena. Studying and replicating the spontaneous and temporary material manifestations of invisible powers such as stress fractures in glass, pigment separation in ink and dye discharge in textiles, Fujimaki uncovers  unsuspected and time-based patterns. Her audience is invited to share in her process of discovery and unyielding enthusiasm for the unknown. http://www.miofujimaki.com/

Sae Honda (JP) is a Japanese jeweller / artist based in Japan and the Netherlands. She graduated from Musashino Art University in Tokyo in 2010, and later studied at Gerrit Rietveld Academie from 2013 to 2016. Some of her works are included in the permanent collection of Stedelijk Museum Amsterdam and Rijksmuseum Amsterdam.   https://www.saehonda.com/

Qiaochu Guo (CN) is an artist based in the Netherlands. Her works care about the Mythological clues in a modern context. By gathering diverse and fringe perspectives, she reflects on the spiritual status in the accelerating society. She has a MA from Design Academy Eindhoven. Qiaochuguo.squarespace.com

Vincent Knopper (NL) is a visual artist and he lives and works in Amsterdam. He describes himself as an arthandler, artist, carpenter, designer, furniture maker, handy-man, painter, renovator, sculptor, woodworker. Through these descriptions he aims to articulate the similar yet distinctive faces of making, use of materials, references and labour that represent the core of his practice.

With shapes borrowed from elements such as railings, bumpers, and furniture, Knopper creates sculptures that are recognizable as functional while their function is not immediately identifiable. By leaving their function open, the material of the work and its relationship to its surroundings become the subject. https://www.vincentknopper.nl/
De Apotheek Tolhuis